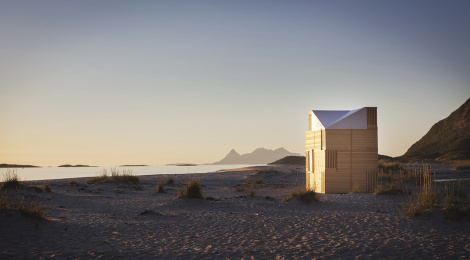 For thousands of years people have followed the movement of animals and the seasonal rhythms in the Arctic landscape. Footprints are few. SALT is inspired by and moves in that same Arctic landscape with care and respect.

SALT begins its journey on an Arctic beach on the mountainous island Sandhornøy. Sandhornøy is in Gildeskål municipality in Northern Norway, just south of Bodø. SALT opened in August 2014 and will stay at Sandhornøy until 2016. Over the coming years, SALT will travel across the northernmost part of our planet, making a home in Greenland, Iceland, the Faroe Islands, Ireland, Scotland, Spitsbergen, Alaska and Russia.

SALT consists of several structures taking their form from the fiskehjelle (fish rack), a strong symbol of the livelihoods of the people of the north. Within these simple and portable structures the audience is invited in to experience extraordinary art projects, concerts, theatre, readings and local food cultures.

The world is watching the Arctic. It is estimated to hold more than twenty percent of the world’s currently unexploited oil reserves; it is the home of many of the world’s most vulnerable environments. Climate change is increasingly visible, the rate of change exceeding that of any other part of the world. What will happen as ever larger areas become ice-free, with nations and global corporations pushing for the extraction of oil and minerals?

Mankind has inhabited the Arctic landscape for ten thousand years. Arctic nomads wandered with the ice, taking advantage of available resources from coastal areas and a mountainous countryside. Their concern for and close relationship to nature means that archaeologists are able to find few remnants of their culture. This is the essence of the Arctic indigenous people’s philosophy and the guideline for SALT’s eight year long journey, which will be a cultural platform focusing on our common future, lifestyle and on environment and climate changes.

Northern Norway has been the uninterrupted abode of more people than anywhere else in the Arctic region. This has been possible due to the abundance of fish at the outskirts of the Gulf Stream, as well as the inventiveness and stubbornness of its inhabitants. To endure long winters, all kinds of food preservation methods had to be invented. Two of the most successful were the salting and drying of fish on rocks (clipfish) and the drying of fish on fiskehjell constructions – the fish rack (stockfish). For thousands of years, such fish racks have been seen along the northern coast, on exposed headlands and small islands, where winds are strong and fish dries fast. Today, in many places, these are in the process of being torn down and forgotten.

The fish rack has a form that reflects the coastal mountains. It has solid, strong poles that allow gusts of wind to slip through; it is a steep, slender and tall structure with an inherent Arctic flexibility; its lightness effectively enables it to be erected and taken down in a day in case people need to move along the coast. Since the poles float, they can also be dragged behind a boat when people look for new land, new seas and a new life. SALT has an equally flexible and fundamental function, albeit using art as the primary means of support.

← Invitation for the exhibition
Interview with Sverre Fehn →